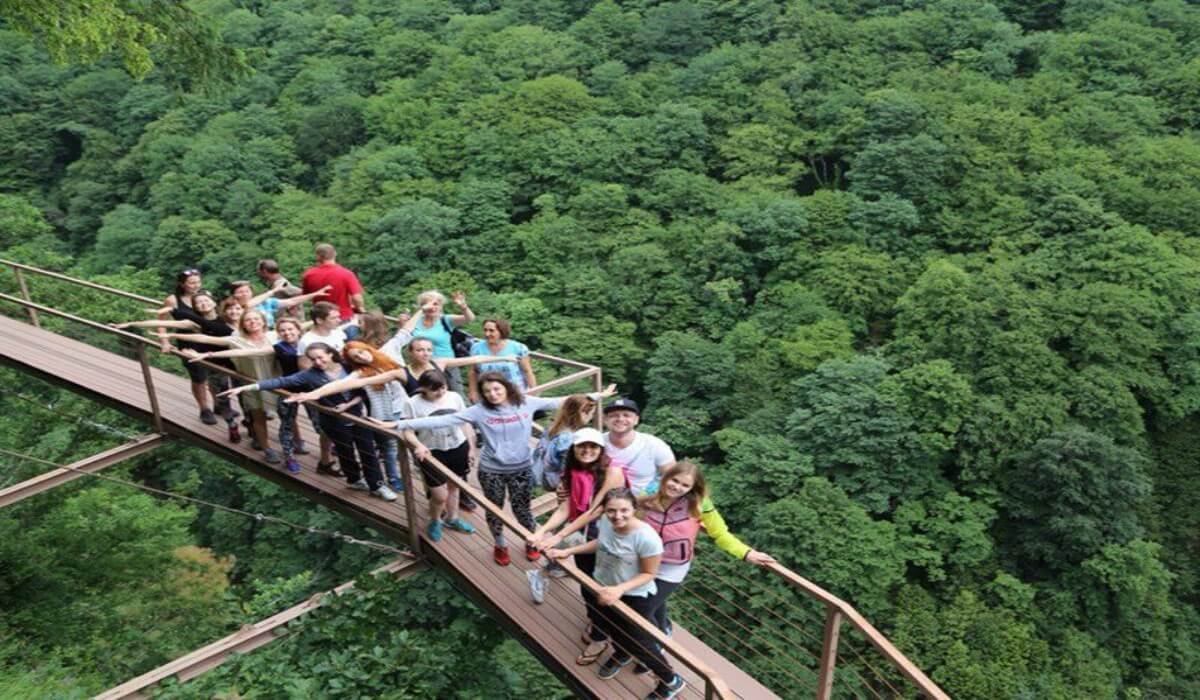 Western Georgia - The ancient kingdom of Colchis, the land of the Golden Fleece and the princess of Medea, centered in the present Poti, was originally a Greek colony and a well-known school of rhetoric and philosophy. Kutaisi - the largest city in Western Georgia was the capital of the ancient kingdom of Colchis in the second millennium BC. Many other settlements were founded on the Black Sea coast, today the location of magnificent UNESCO monuments.

Gelati Monastery
The Gelati Monastery of the Virgin near Kutaisi is the most significant medieval monastery in Georgia. Center for church and cultural life, the residence of the Catholicos from the second half of the XVI century to 1814, a monument to the World Heritage (1994).

The monastery was founded by King David IV the Builder in 1106 and became his burial vault. The cathedral church was built before 1125 and for another five years it was decorated with mosaics, which are considered the best in the entire Transcaucasus. At that time the monastery was the seat of the Gelat Academy, whose members were keenly interested in ancient Greek philosophy. 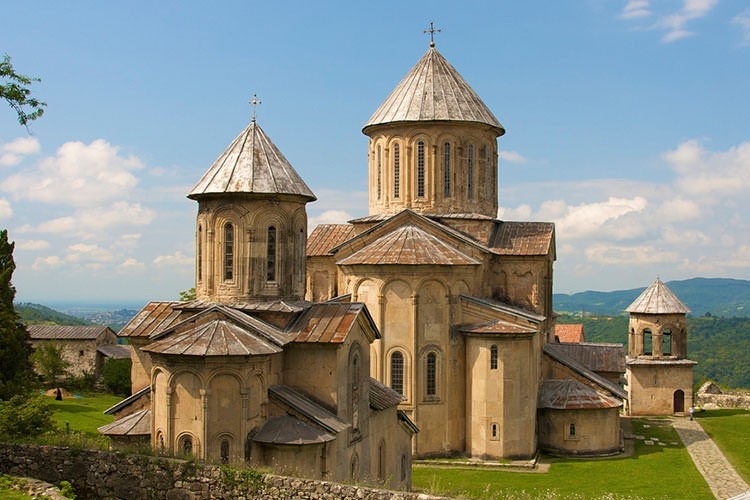 Sataplia Reserve
The reserve Sataplia was founded more than 75 years ago, a few years ago it was seriously updated and is now actively advertised. The main three attractions of the reserve are a pavilion with preserved traces of dinosaurs, 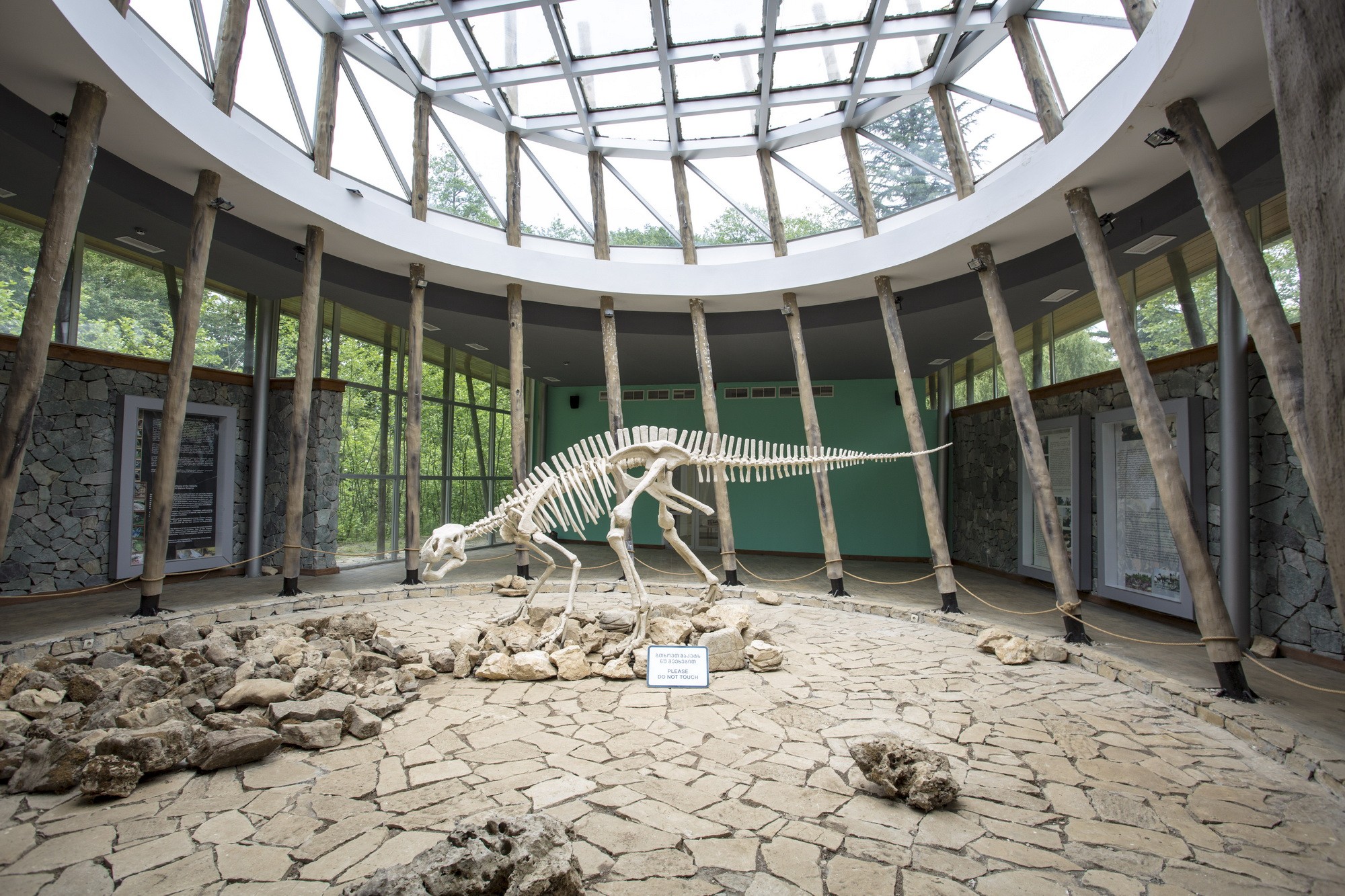 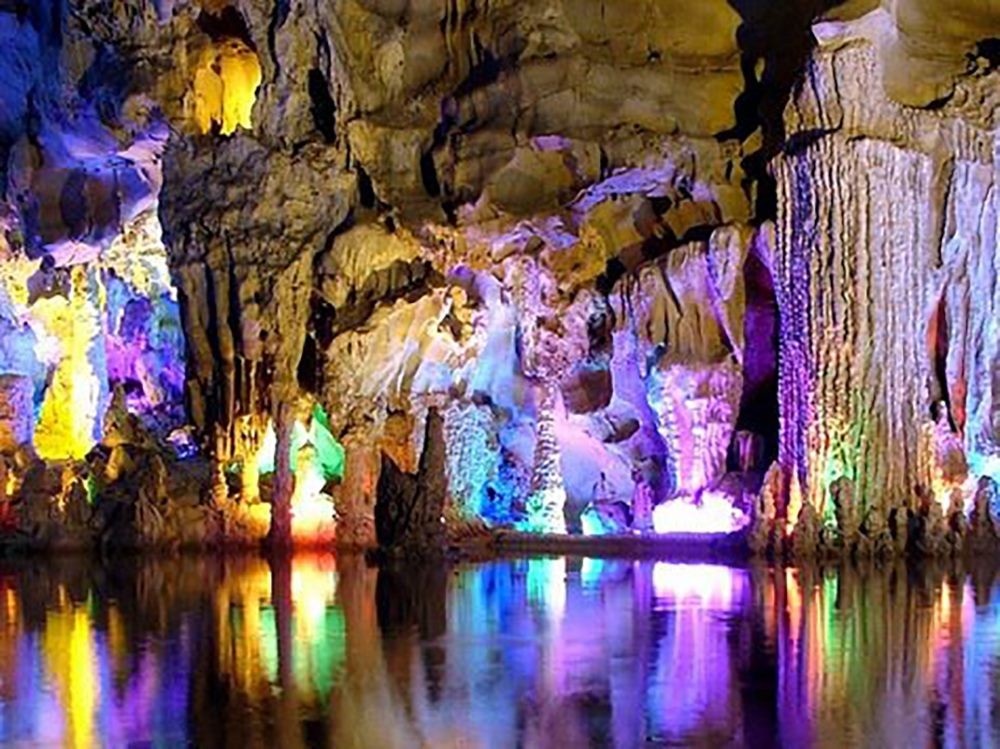 and a glass balcony - an observation deck on top of Mount Satapli (the highest point of the reserve). Traces of dinosaurs were found in the 30s of the XX century by one of the inhabitants of the surrounding villages, a few years later a reserve was established on this site. 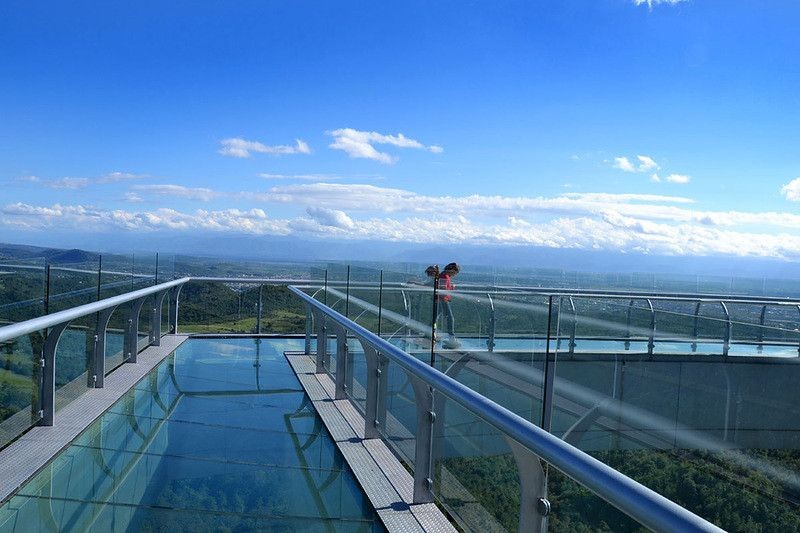 Prometheus cave or, as it is also called, Kumistavi cave, is near Tskhaltubo and not far from Kutaisi. It refers to the kind of karst caves and is the most popular and visited in Georgia, surpassing even its nearest neighbor, the Sataplia cave. In Imereti, it is considered a pearl among local attractions and attracts many tourists to its bowels, while being a nature monument of the III category.

The Pillar of Katzha
The Katskhian Pillar is a limestone monolith 40 meters high near the Katskhura River, the right tributary of the Kvirila, in the Katzha settlement (the western part of the Imereti region of Georgia), near the city of Chiatura. The Pillar of Katzha and the temple erected on it are first mentioned in the records of the Georgian prince Vakhushti Bagrationia
At the top of the mountain formation stands a church built between the 6th and 8th centuries. Before the arrival of Christianity, the Katzha Pillar was revered by the locals as a symbol of the fertility god. After the arrival of Christianity in Georgia, the pillar did not lose its cult significance. People believed that this is a place where a person can approach God. 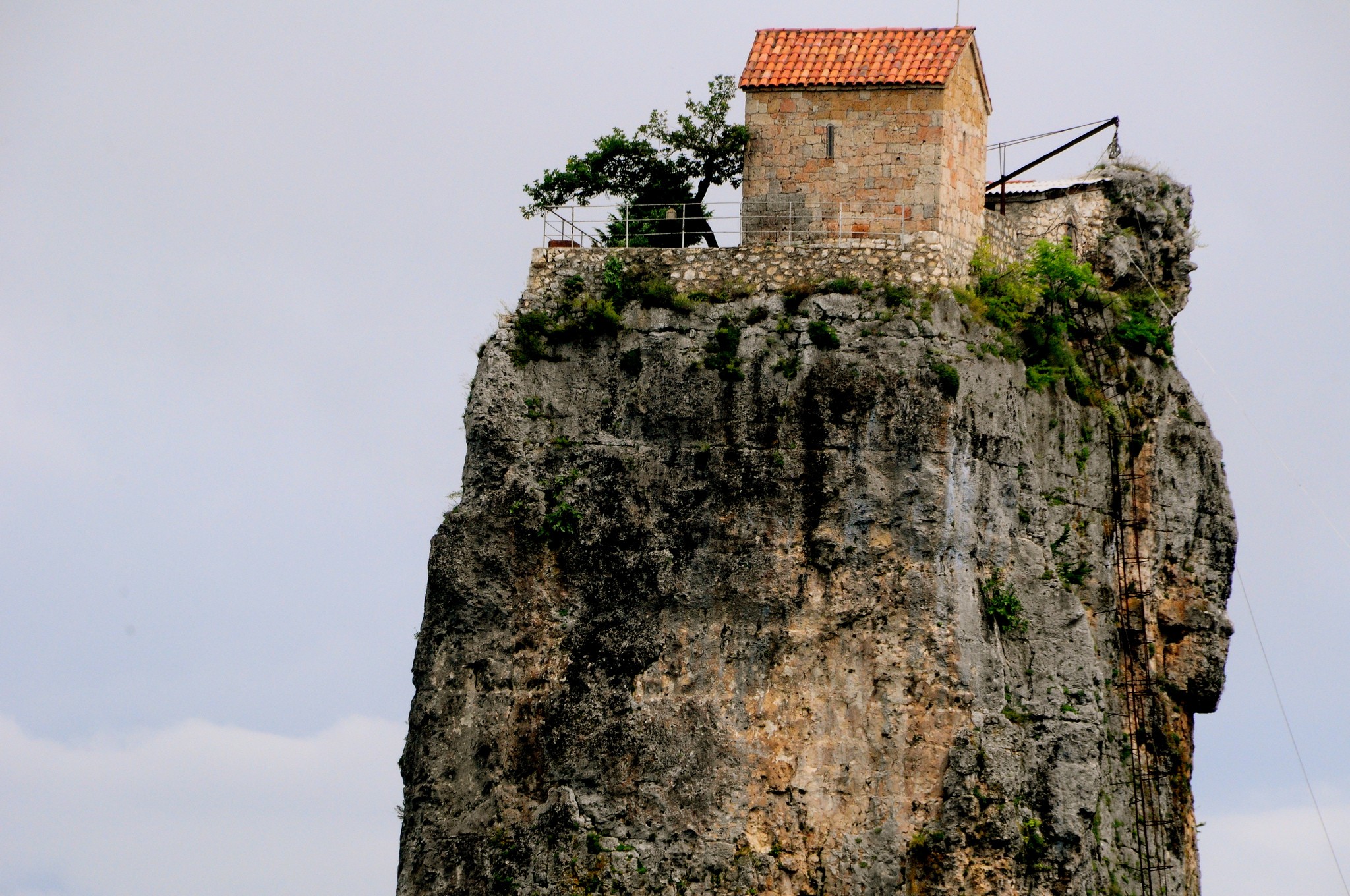 One of the wonderful natural attractions of Georgia is the Martvill Canyon. This amazing place is located near the town of Martvili. This pretty town, which used to be called Chondidi, is located on the Colchis lowland. The city is notable for its monastery, built in the 7th century in honor of the holy martyrs. Next to the monastery stands the Church of the Theotokos. Until now, the frescoes of the 14th century have been preserved in the temple.
The Martvil canyon, length of 2400 meters, forms the karst river Abash, originating from the inaccessible plateau of Askhi. This small creek with cold clear water cut through a deep canyon in the rocks, forming a picturesque gorge. Around the canyon are ancient relict forests and high cliffs. From the rocks, long lianas descend, which together with dense vegetation create the feeling of a tropical forest. The river flows at the bottom of the gorge to a depth of 40 meters. The spectacle is delightful and fascinating. The rocks hang over the water, forming a vault at a tremendous height. 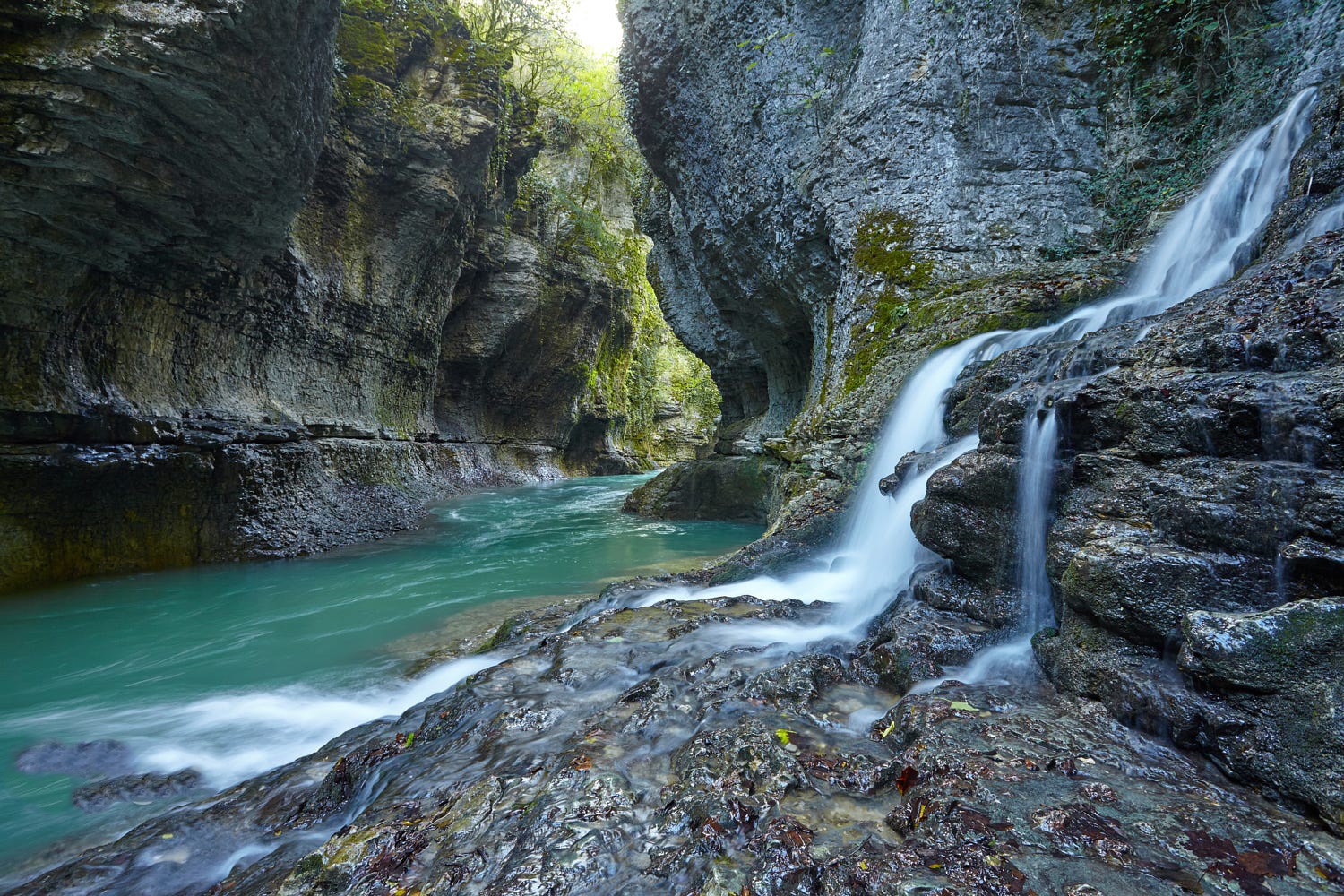