The 12 dish you need to try in Georgia 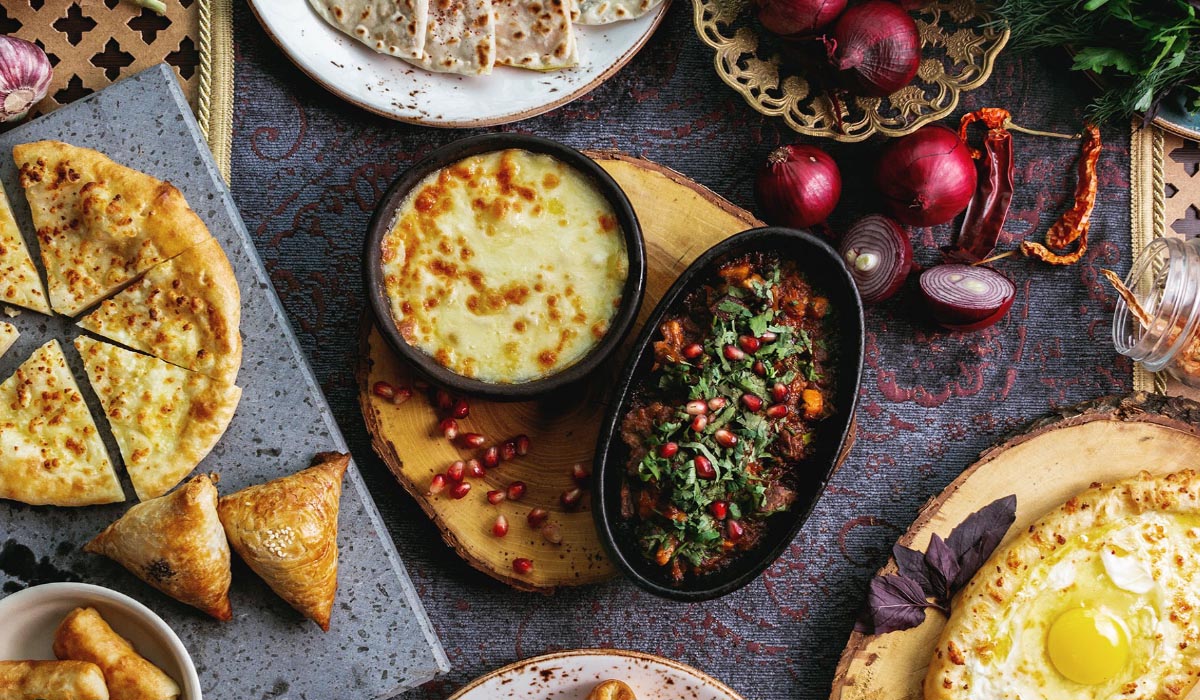 The 12 dish you need to try in Georgia

The whole foods cuisine in Georgia divided into eastern and western, each has its peculiarity, and the meals are prepared according to their unique recipes. Eastern cuisine focuses on meat traditions, choosing lamb and veal. Western is rich in spices and its variants of traditional dishes, here they focus on poultry, vegetables and cheeses.

It is an ideal country for those who like to drink wine and have a tasty meal, but, as you already knew, be ready to gain a few pounds.

A flour product, which is a cake with cheese, and cheese there is more than bread. Do you want to make a Georgian laugh? Cut the khachapuri in an Adzharian knife! Then you will be compared to a Chinese who eat borscht with chopsticks. Khachapuri in Adzharian style is similar to a boat filled with hot cheese and butter, in the center of which an egg is hammered. Correctly, eat khachapuri in Adjarian with hands. Breaking off the edges of the dough, dunk it in the cheese-egg middle.

What food is Georgia famous for? Of course for khinkali! The national dish of Georgian cuisine from the mountainous regions of Pshavi, Mtiuleti and Khevsureti, then the dish spread to other regions of the Caucasus.

Never call khinkali meat dumplings. It is an insult! In Georgia, this dish is incredibly popular and it is always bought in dozens, but not by the piece. In the dough, molded in the form of bags, meat with herbs is added, and the most delicious in khinkali is broth. Eating khinkali, it is an art. They take him for a tail, turn over, bite, drink juice, and only then eat the dough and stuffing. The tails remain on the plate.

100 and one dishes of beans

There is no more in the world of the country, which would overtake Georgia according to the options of dishes from beans. Georgians knowingly love this product: firstly, it is useful, and secondly, due to the variety of cooking options - it cannot get bored.

Lobio refers to all dishes from green pod or bean. From the Georgian language, the lobio is translated: beans. Taste variety is achieved by adding a variety of seasonings, as well as the method of preparation. The most common ingredients of the dish are onions, vegetable oil, and wine vinegar.

In Georgia, lobio is eaten every day, the dish is as typical as in Asia rice. Traditionally it is accepted to eat it not with a spoon or fork, but dipping into it pieces of pita bread.

Satsivi - a dish where the sauce plays the first role

Next dish in our top chart of the Georgia country food- satsivi is prepared from a bird, with the addition of sauce, which gave the name to the dish. Often satsivi is with a chicken, but in some areas of Georgia prefer a turkey and even a goose. The peculiarity of the dish is that satsivi sauce is prepared with the addition of a large number of walnuts, and the table is served cold.

One serving of satsivi is designed for several people at once, and it is necessary to take lavash to the dish. The chicken is eaten with a knife and fork, and the pita bread is dipped in the sauce.

Georgian shotti bread, also called shotis puri ("puri" is Georgian bread), is baked in a special tone oven, at the bottom of which there is a fire. It is also called "tonis puri", that is, "bread from the oven," and sometimes "dedis puri" - "mother's bread".

Georgian national soup made from young lamb or more often from poultry - chickens, turkeys. Unlike Russian soups, chikhirtma does not have vegetable, cereal, but consists of meat and broth, which is thickened with flour and egg-acid dressing. It is this last refueling that makes up the technological feature of the chihirtm, it creates a unique taste for it.

In Georgia, mtsvadi is one of the most popular and common dishes. No feast can do without mtsvadi, Georgian wine and toast. In a roadside cafe, there may not be salads or soups, but shish kebab in Georgian will be required.

Georgian puff cake with cheese is prepared from a large number of layers of dough, which is pre-cooked. As a filling is traditionally used brine Imeretian cheese. The main principle of preparation of Achma is dough unsweetened, and cheese is salted.

Phali is not just a national dish, but also an aphrodisiac of Georgian cuisine. Snacks are prepared from walnuts, greens, cooked or baked vegetables and traditional spices. I will not even talk about taste and benefits, Georgian cuisine is diverse and terrific.

Georgian cheeses are famous no less than French or Dutch. The most famous of them comes from Samegrelo and is called suluguni. If you want to know the real taste of Georgian cheese, then do not go after him to the store. Only fresh, freshly cooked cheese in a special starter does not lose its flavor properties.

Tkemali is a famous Georgian sauce, delicious and healthy. Mainly used with fish, meat, poultry, garnishes from potatoes and pasta. At the base of the tkemali lies the sour plum. Modifications of this sauce consist in the fact that the sour plum is replaced with other acidic fruits, for example, gooseberry, red currant. It is believed that it contributes to the cleansing of the body due to a significant amount of pectin contained in the plum. In addition to pectin there is a large amount of vitamin C.

Strung nuts in the grape juice. This delicacy you cannot twist with anything. Stringed nuts, wrapped in a "substance" that is incomprehensible to tourists, are the most useful, Georgian delicacy-fast food. Churchkhela eats both on holidays and on weekdays, but the cooking process is long and laborious.