Mingrels, sometimes Mingrels are a nationality of the Kartvelian language family, the subethnic group of the Georgian people is in need of pain. They speak Megrelian, which is part of the Megrelo-Zanz language group of the Kartvelian language family, which is separate from the Georgian language. All the Megrelians, besides their native language, also speak modern Georgian.
Mingrelians are the people of the historical region of Megrelia in Western Georgia.

They live in Samegrelo-Upper Svaneti in the north-west of Georgia, as well as in the east of Abkhazia (Gali and Tkvarcheli districts) and in the Georgian capital Tbilisi.

Like many Caucasians, Mingrelians respect and try to follow the laws of their ancestors, passing them orally from generation to generation.

Among the Megrelians, love of singing is widespread, and many of the tunes are very melodic. The most famous dishes of Megrelians are kupaty, kuchmachi, fried pig, adzhika, gomi, satsivi, corn tortillas (mchadi), suluguni and khachapuri. 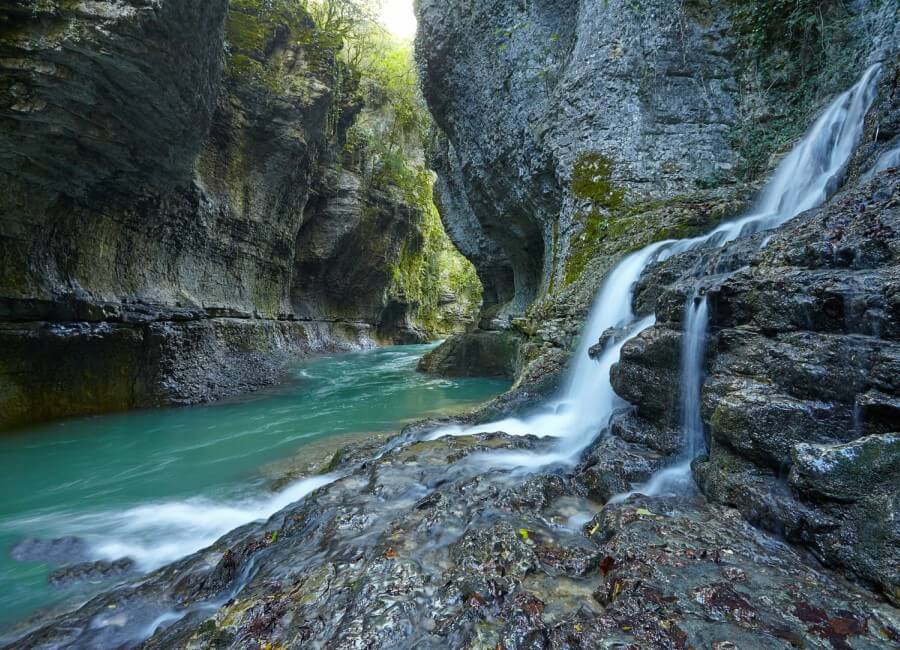 One of the wonderful natural attractions of Georgia is the Martvill Canyon. This amazing place is located near the town of Martvili. This pretty town, which used to be called Chondidi, is located on the Colchis lowland. The city is notable for its monastery, built in the 7th century in honor of the holy martyrs. Next to the monastery stands the Church of the Theotokos. Until now, the frescoes of the 14th century have been preserved in the temple.
The Martvil canyon, length of 2400 meters, forms the karst river Abash, originating from the inaccessible plateau of Askhi. This small creek with cold clear water cut through a deep canyon in the rocks, forming a picturesque gorge. Around the canyon are ancient relict forests and high cliffs. From the rocks, long lianas descend, which together with dense vegetation create the feeling of a tropical forest. The river flows at the bottom of the gorge to a depth of 40 meters. The spectacle is delightful and fascinating. The rocks hang over the water, forming a vault at a tremendous height.

Dadiani Palace is the residence of Megrelian rulers from the Dadian clan in the Georgian city of Zugdidi.
The Italian missionary Arcangelo Lamberti, who visited Georgia in the 17th century, wrote that "the prince has more than 50 palaces between whom the palace in Zugdidi is the most beautiful: it is built of very good stone, its interior chambers are decorated in Persian."

Now the existing palace was erected in 1873-78. for the princess Ekaterina Dadiani. During the design, the architect Edgar J. Rice repelled from the Vorontsov Palace in Alupka. The second palace was built in the 1880s. for her son, the last Megrelian ruler, according to the project of Leonid Vasiliev.

After the abdication of Nicholas Dadiani from the throne (1866), his sister Salome went with her mother to Paris, where on May 18, 1868, she married the grandson of Marshal Murat, Prince Asile Murat, who brought several relics of Bonapartists to Mingrelia, including one of the three posthumous masks of Napoleon . Now it is exhibited in the historical museum, which occupies part of the palace complex. 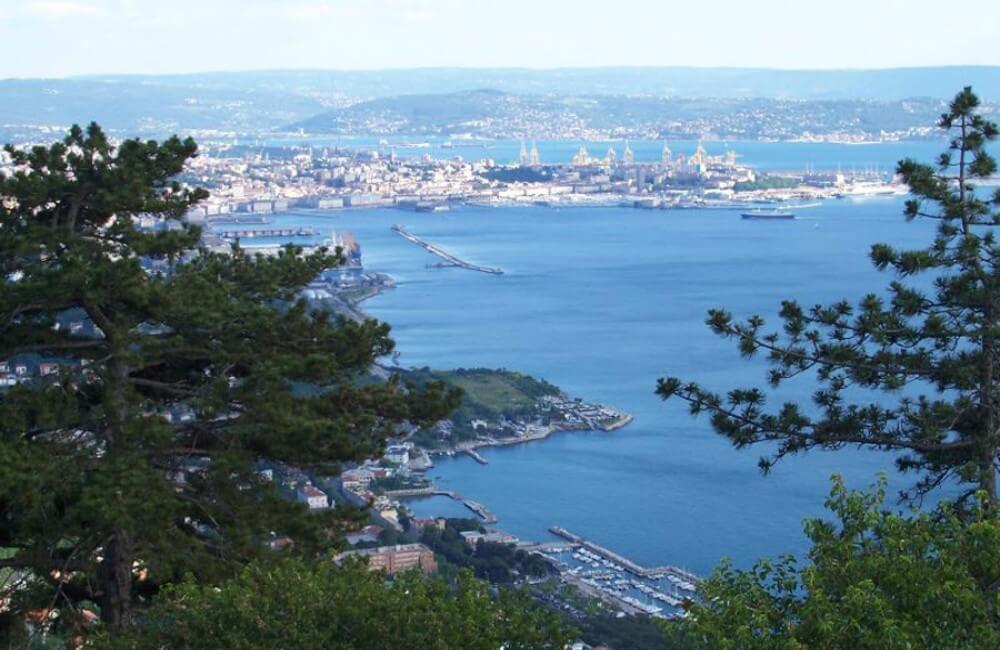 Poti (in georgian ფოთი) is a city in the west of Georgia. It is located at the mouth of the Rioni River, on the shore of the Black Sea. In Poti is the largest on the east coast of the same port.

The city of Poti arose on the site of the ancient Georgian (Kolkhian) city of Fasis. One of the three main seaports of Georgia in the XX century.
Phases (Phasisi), located on the place of Poti in ancient times - one of the oldest cities in the Middle East and the world. The Greek geographer Strabo pointed out that this city was located between the river Rioni, Lake Paleostomi and the Sea of ​​Ponto (Black Sea). Fasis was founded by the inhabitants of Miletus for trade purposes, as a fortified folding place and colony. At the time of Ammian there was still a garrison of 400 men of the elite army. In the city was the temple of Cybele. Fasis was the easternmost city in the Pontian kingdom. Pheasant birds got their name from the name of this city; according to legend, already the Argonauts brought them with them to Europe.

In the IV century in Fasis, there was the Colchis Academy, also called the "Higher Rhetorical School." Georgians and Greeks studied there, teaching was conducted in two languages ​​- Georgian and Greek. In it were studied: rhetoric, philosophy, physics, mathematics, logic and other sciences. The well-known Georgian philosopher Ioane Lazi was educated at the Colchis Academy and together with the scientist Zachary Gruzin accompanied his disciple, later famous philosopher Peter Iber, to Constantinople.

In historical sources, the name of Poti first began to be mentioned from the 7th century. 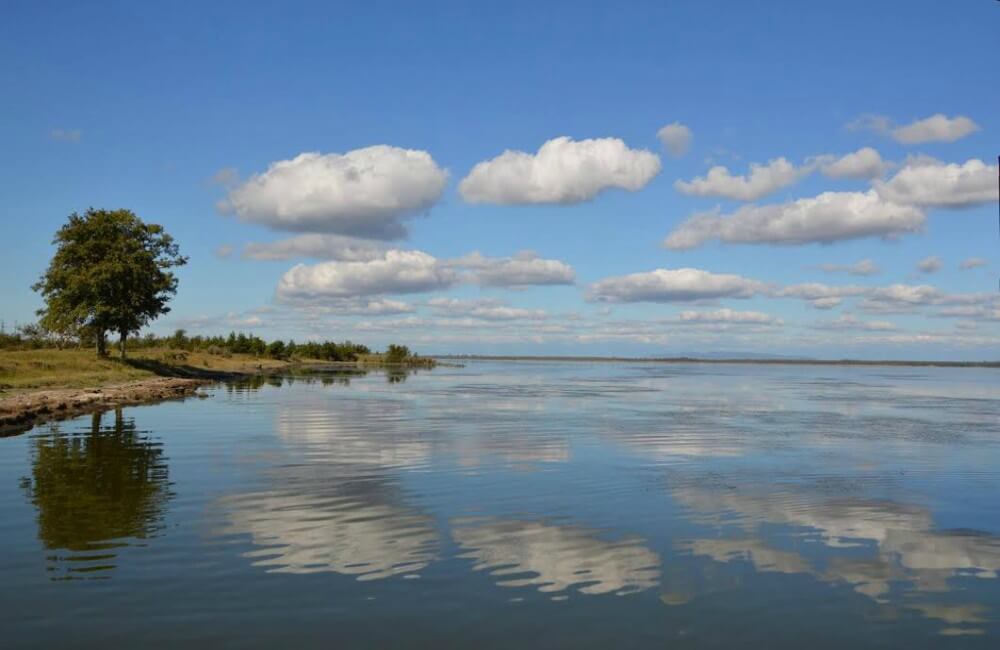 It is rather an estuary than a lake. It feeds on the flowing river Pichora. Flows the duct to the river Kaparcha, flowing into the Black Sea. On the shore of the lake is the city of Poti.
The surface area of ​​the lake is 18.2 km ². The average depth is 2.6 m, the largest is 3.2 m. The altitude is 0.3 m above sea level [3] Until 1933, a freshwater lake, later an open lagoon with sea-water, desalinated in high waters by river water.

The lake is located within the boundaries of the Colchis Reserve.

In 1961, at the bottom of the lake, archaeologists discovered traces of the settlement of the 2nd century AD. e. This area is a possible location of the city of Fasisa. 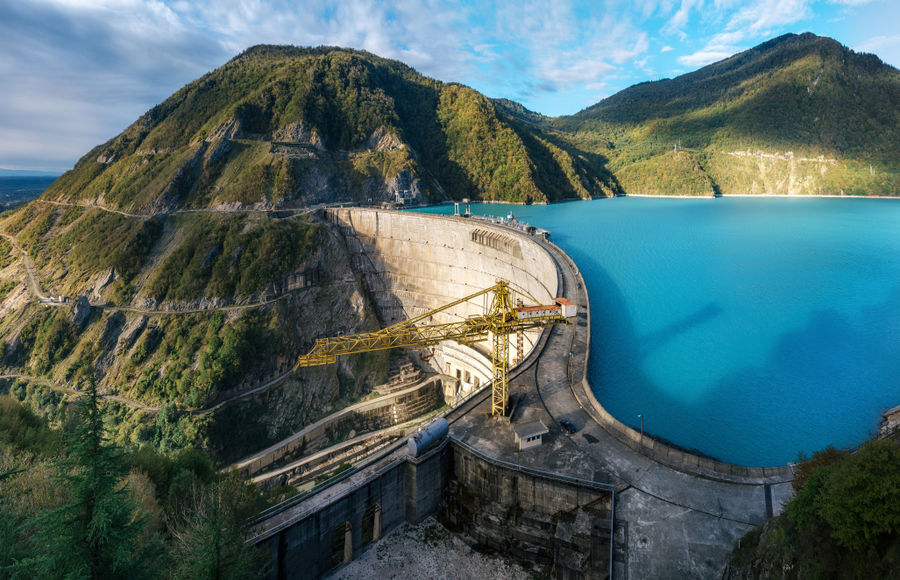 Ingurskaya HPP is the largest hydroelectric power station in the Caucasus. It is built on the Inguri River near the Georgian-Abkhaz border and the city of Jvari. The total head of the water is 410 meters, of which 226 m is the share of the dam, and the rest due to pressure derivation.
The capacity of the Inguri HPP is 1,300 MW, and a year it generates an average of 4,430 million kW of electricity. There are 5 generators in the Hall of HPPs, equipped with radial-axial turbines, which operate at a rated head of 325 meters (maximum - 410 meters). Each turbine has a maximum flow rate of 90 cubic meters of water per second. Turbines rotate generators with a capacity of 260 MW each. Before the dam of the hydropower station, the Inguri or Jvar reservoir was formed, with a useful volume of 676 million cubic meters (full - 1110 million cubic meters).
The Inguri hydropower complex includes not only Inguri hydroelectric power station itself, but also a cascade of four delta hydropower plants on the Erisskali river.