Kakheti (cargo კახეთი [Kakheti]) is a land and a historical region in the east of Georgia, in the upper reaches of the Iori and Alazani rivers.

The capital of Kakheti is Telavi.

The nature of Kakheti is quite diverse.
The Alazani Valley and the northern slopes of the Gombori Range are very favorable for growing grapes - it is here that the main wine center of Georgia is located.
The modern region of Kakheti is located on the territory of three Georgian historical regions of Kakheti, Kukheti and Gardabani. According to the chronicle of Kartlis Tskhovreba, the ethnarch of all the Georgians of Kartlos had five children, among them Kakhet, Kukhet and Gardaban.

In the early Middle Ages the center of Kakheti moved to the depths of the Ior valley, to the north, to the city of Gremi, and later to the city of Telavi.

After the collapse of the unified Georgian state, from the 11th century until the unification of Kartli and Kakheti in Kakheti, the tsar himself began to rule. 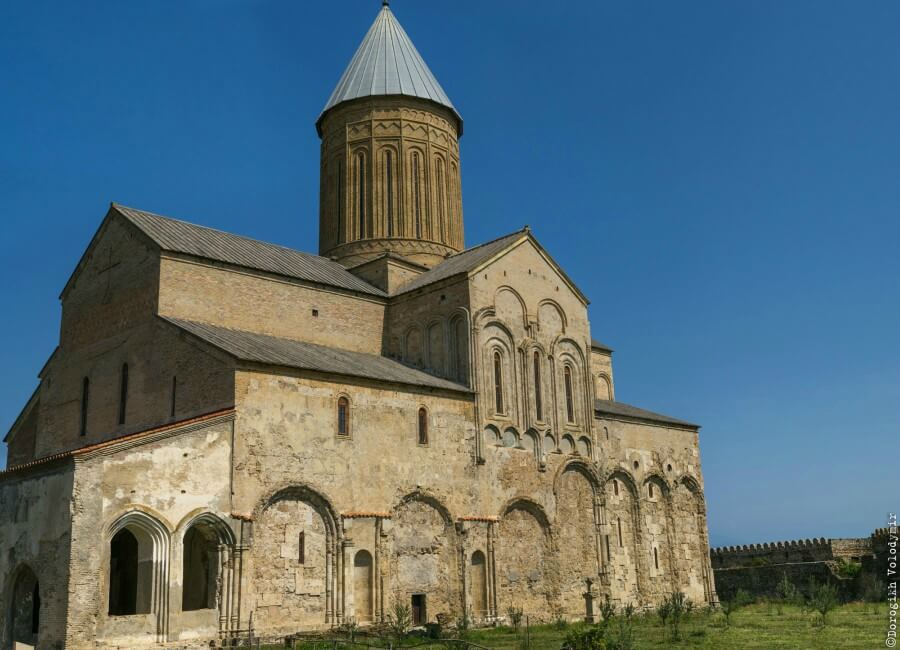 Alaverdi is a cathedral of the first quarter of the XI century (St. George's Cathedral) and a monastic complex near the village of the same name in the Akhmeta municipality of Kakheti, Georgia.

The height of the cathedral is about 50 m, the height of the interior is above 42 m. Prior to the construction of Tsminda Sameba in Tbilisi, the Cathedral of Alaverdi was the highest church building in Georgia.

The cathedral has preserved the murals of the 15th century.

The Alaverdi Cathedral is presented for inclusion in the UNESCO World Heritage List. 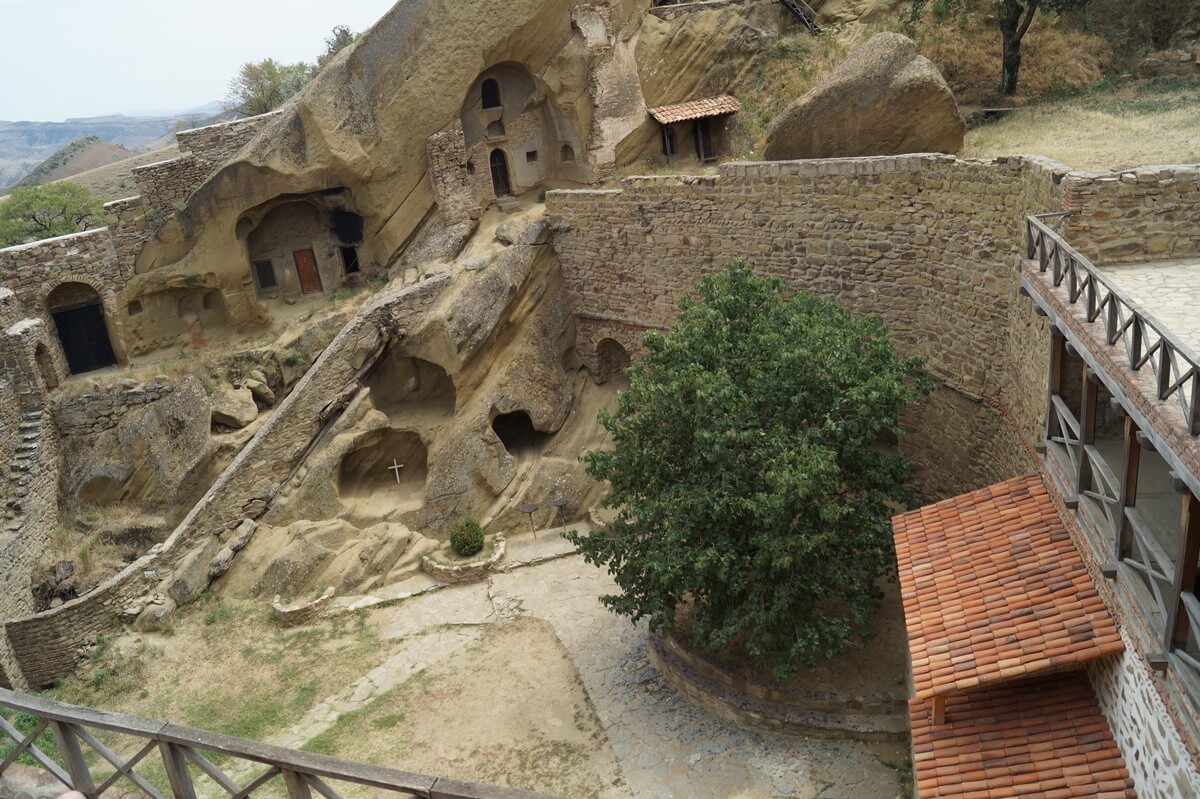 Is a complex of Georgian cave monasteries of the VI century, located 60 km southeast of Tbilisi, on the Georgian-Azerbaijani border, and stretching for 25 km along the slopes of the semi-desert Gareja ridge. The state border between Georgia and Azerbaijan divides the monastery complex David-Gareji into two parts.
The complex is carved in the rocks of about 20 monasteries. The main monastery is the monastery of St. David, which is located on the northern slope of the mountain, separating Georgia and Azerbaijan. The border passes along the top of the mountain, which Georgian historians call Udabno, after the name of one of the monasteries. This monastery is on the Azerbaijani territory - on the southern slope of the mountain. In addition to them, on the southern slope of the mountain there are more than 100 caves, which were used by monks as cells. The most remote from the border is the Bertubani monastery (dating from the 12th century), which is about two kilometers from it.
Frescoes of the 8th-14th centuries were preserved in many churches and refectory monasteries. with portraits of historical figures, including a portrait of Queen Tamara. 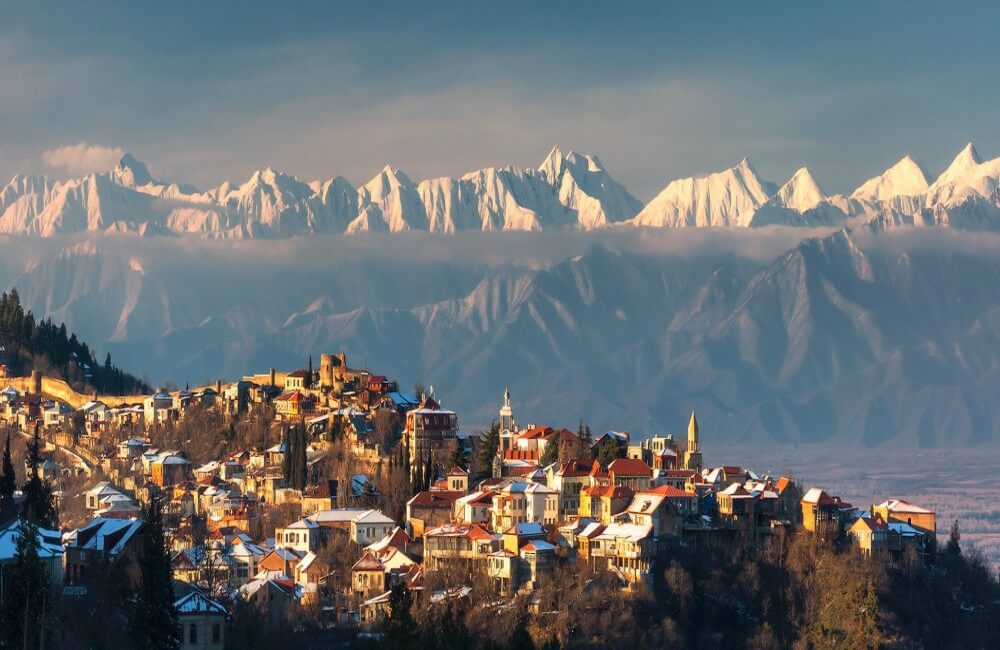 Sighnaghi is a small town in eastern Georgia, on the mountainside, in the historical region of Kakheti. Center for the Historical and Geographical Region of Kiziki. It is located on terraces, connected by winding steep streets.
It is famous for its eponymous fortress, which is included in the list of the most famous and large fortresses of Georgia. The walls of the Signan fortress miraculously survived and today surround the old part of the city and go far beyond the city borders. On the perimeter of the walls there are 28 watchtowers, from which a wonderful view of the Alazani valley opens.

This small town has a beautifully preserved ancient heritage - a fortification wall with a length of about 5 km. Massive reinforcement repeats the terrain, gently rounding the city along the perimeter and towering on the mountains. Feature - perfectly preserved stone masonry, lookout fortresses look great. The structure of the wall is 28 towers with loopholes and 5 entrances around the perimeter.

A surprising place is full of surprises. This is the second city in the world after the famous Las Vegas, where you will be married at any time of the day! The city registry office invites lovers to a solemn wedding around the clock. The building is very decent, excellent interior and a romantic atmosphere.

If you go to this amazing city, you will have an opportunity to visit one of the best museums of local lore in Georgia. He entered the top five of the most promising, distinguished by an excellent interior design and a rich collection of exhibits.
Today the museum has 2 floors. At the first - the archaeological hall, where they collected unique ceramics of different centuries (in very good condition). On the second - an exhibition of painting. It is divided into two large halls with the exhibits of L. Gudiashvili and N. Pirosmani (a famous artist who conquered admirers with his unique world view). It is here that the magnificent Pirosmani paintings are collected, which are no longer in any collection of Georgian museums. 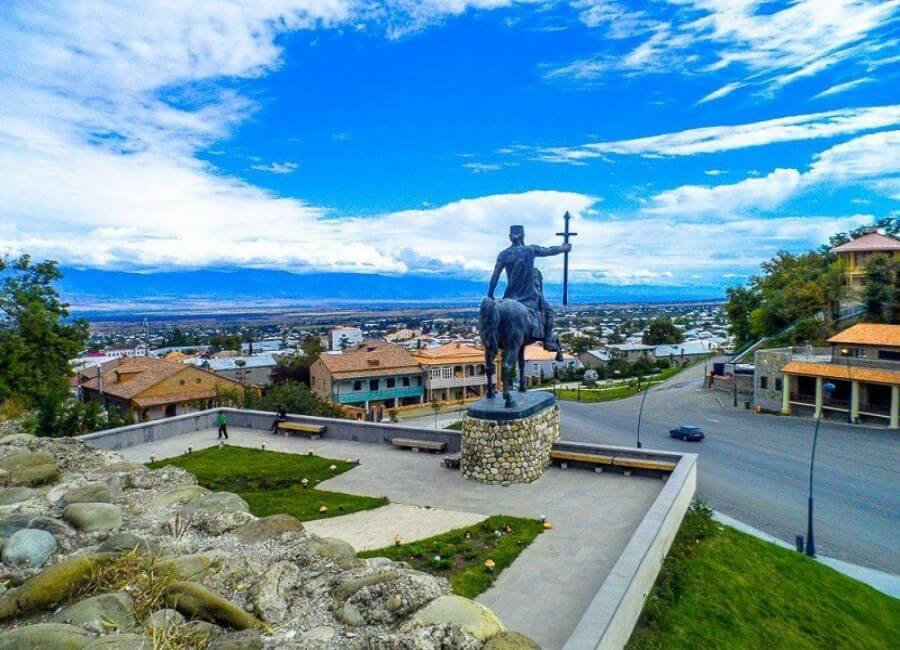 Telavi is the historical capital of all Kakheti, located to the north-east of Tbilisi.
The city was founded around the 8th century, when the first fortress appeared on the site of a modern one. Telavi at one time was the capital of independent Kakheti.
The most important sight of Telavi - the castle was the residence of the kings of Kakheti in the 17th and 18th centuries. The fortress is  in shape square , and inside there is the house in which King Irakly II was born and raised, as well as the remains of a dilapidated church and a chapel. There is also a nice observation deck overlooking the Alazani valley, and from the outside of the fortress you can see the monument to Irakli II on horseback.

Lagodekhi Reserve is located in northeastern Georgia, on the southern slopes of the Caucasus. The reserve will border Azerbaijan and Dagestan. The difference in altitude ranges from 590 to 3500 meters above sea level, mountain slopes cut through several gorges. The largest rivers flowing through the territory of nature protection zones are Ninosnavi, Shromishevi, Lagodekhitskali and Mizimisktsali; on the heights there are glacial lakes, the largest of which is Khala-Hel, a depth of 14 meters, located on the border with Dagestan. On the territory of the reserve there are sulfur springs. 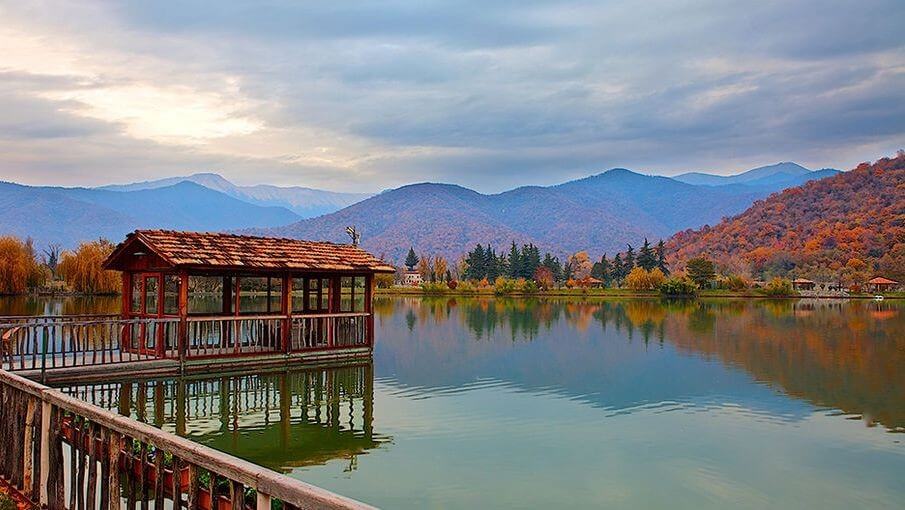 The Lopota Resort is a hotel complex located in the Kakheti region of eastern Georgia, 100 km from the capital Tbilisi and 26 km from city of Telavi. The resort offers a recreation zone stretched over one million square meters. The resort boasts a lake surrounded by eight hotels. The complex is able to accommodate more than 200 people.Lopota Resort's adventure center offers its guests wine tours, cultural tours in Kakheti region and other entertainment facilities. 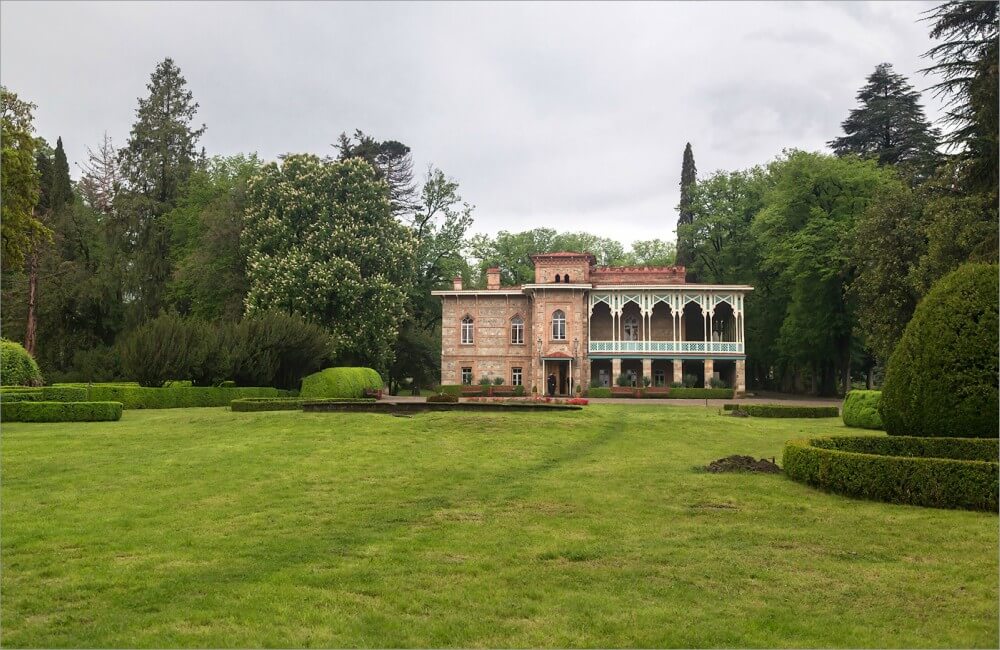 The founder of Georgian romanticism Alexander Chavchavadze turned his estate into a cultural and intellectual center of Georgia. Tsinandali still plays a significant role in the cultural life of Georgia, exhibitions, concerts, literary events and master classes are held here.

Today Tsinandali complex unites a house museum, an ornamental garden, a historic winery, a cellar, a hotel and a cafe. Vineyards have been revived and wine production has been renewed. Here you can have a pleasant time: enjoy the beauty of the ornamental garden, visit the wine cellar, taste the wine of Tsinandali and other Georgian wines. 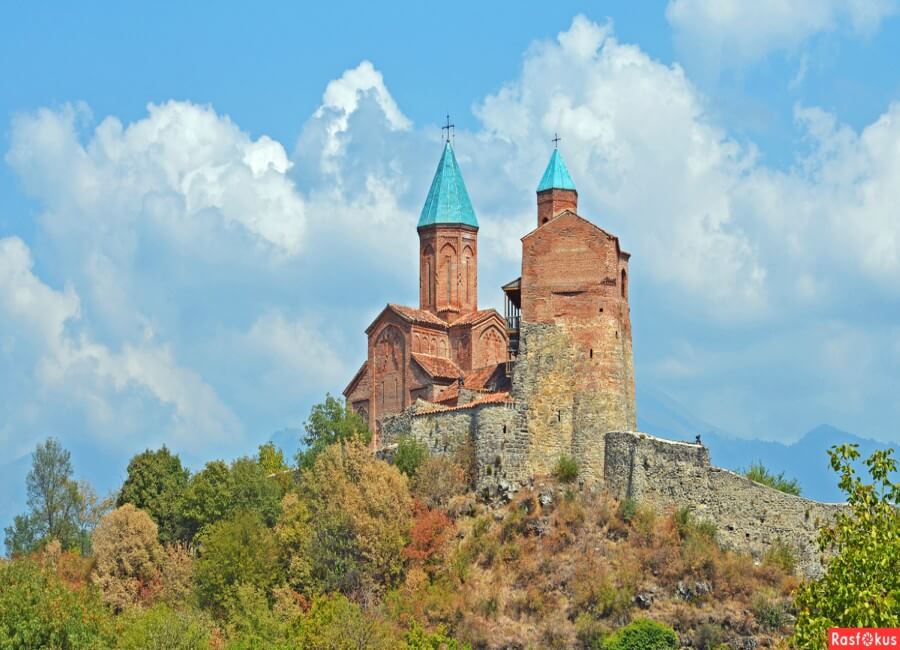 Gremi is an architectural monument of the 16th century - the royal fortress in Kakheti. The fortress with the church of the Archangels is all that remains of the once prosperous city of Gremi. The architectural complex is located to the east of the modern village with the same name in the area of ​​the city of Kvareli, 175 km east of Tbilisi, the capital of Georgia.
The city of Gremi was the capital of the Kakheti kingdom in the 16th-17th centuries. Founded by Levan Kakheti, the capital was the royal residence and the bustling trading city of the Great Silk Road, until it was razed to the ground by the forces of Shah Abbas I in 1615. Since then, the city has never gained its former prosperity and in the middle of the 17th century the kings of Kakheti moved their capital to Telavi.
In 2007, the Gremi monuments were proposed for inclusion in the UNESCO World Heritage List. 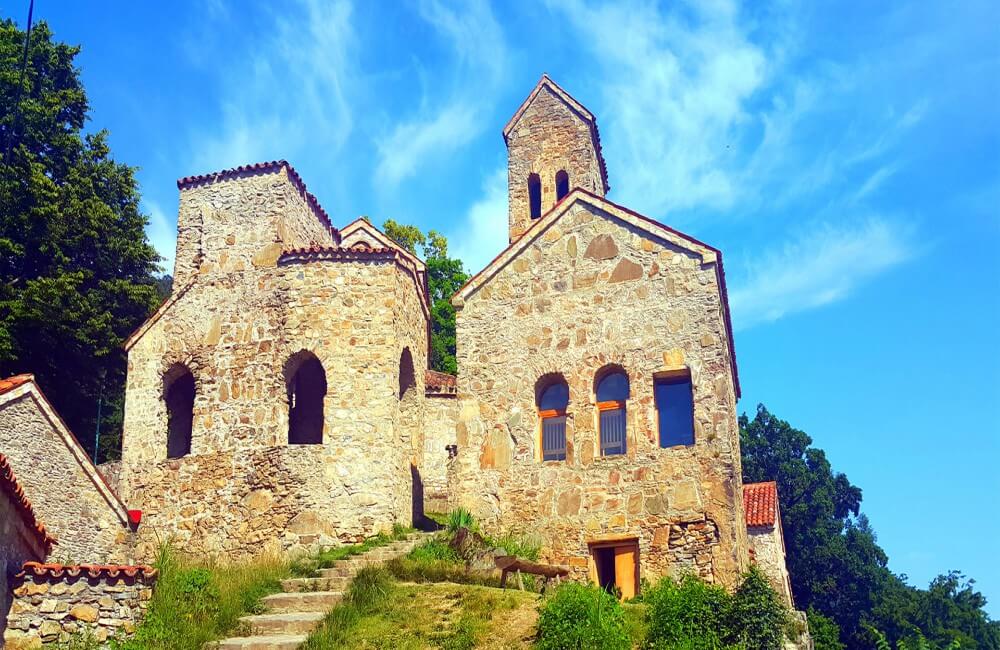 Nekresi is a small, pretty monastery high up on the mountain above the Alazani Plain. It is original in that there was very little that was built on the eastern side of the Valley, and a little built destroyed by the Lezgins. Now it's just a monastery on the mountain, before here (under the mountain) there was a whole city.
Initially, this place was the ancient city of Nekresi. In the VI century, a monastery appeared near the city, which was founded by one of the Assyrian fathers, Abo Nekreski (He is Aviv or Abibos). Since the entire region was then under Persian occupation, the monastic movement was experiencing certain difficulties. Friction with the Zoroastrians led to the Persians taking Abo Nekresky to Mtskheta and executed there. For this reason, the body of the founder of the monastery is buried not in Nekresi, but in the Samtavro temple in Mtskheta.
Later, the monastery suffered many times from invasions of various kinds. 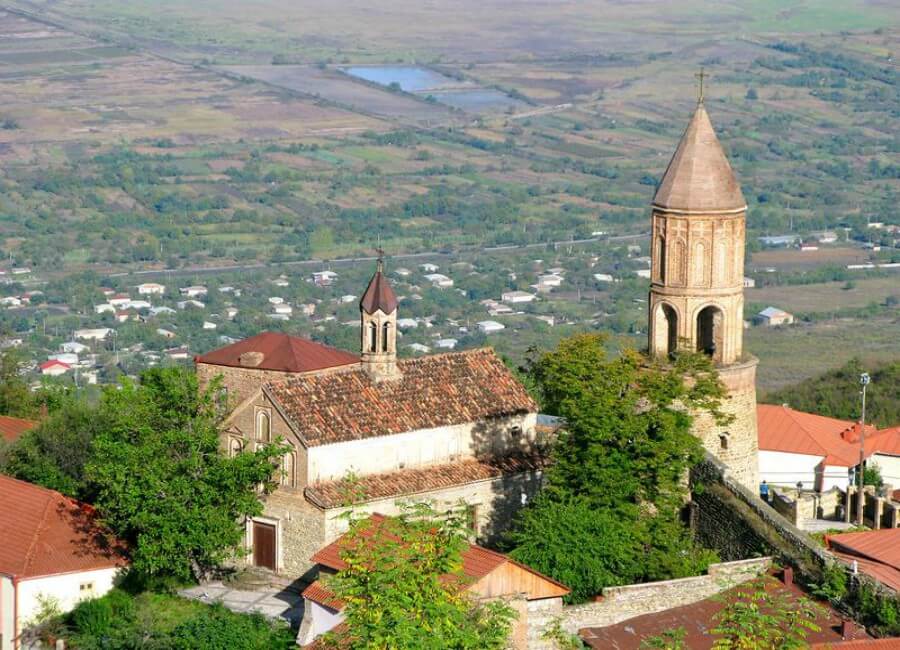 Bodbe Monastery is the nunnery of the Bodbian Diocese of the Georgian Orthodox Church, located two kilometers from Signaghi in Kakheti, Georgia.

It houses the relics of the Enlightener of Georgia, the holy Equal-to-the-Apostles Nina, who died there in 347, at the age of 67, after 35 years of apostolic asceticism.

The temple festival is celebrated on January 14 and traditionally attracts many pilgrims.
Before her death, Saint Nina retired to the place of Bodbe and there, after serving some time, she died and was buried. Soon, at the request of King Mirian over the grave of St. Nina was built a temple in honor of St. George - heavenly patron of Georgia, and near it a monastery also appeared.

Over time, the monastery became a real cultural center and the center of the Bodhby diocese. However, the true flourishing of the monastery of St. Nina acquired in the XV century. The kings of the Kakhetian kingdom were always favored by the monasteries and even chose it as a place for coronation.