Mtskheta (cargo მცხეთა) is a city in Georgia located at the confluence of Aragvi and Kura. It is the administrative center of Mtskheta-Mtianeti. The city is located a few kilometers north of Tbilisi. The population is 7 423 people.
The ancient city of Georgia, founded in the 5th century BC. According to legend, the city was founded by the legendary Mtskhetos. "After the death of King Kartlos, his wife divided the land between her sons. Among them, the senior Mtskhetos - settled in the drainage place of the Aragvi and Mtkvari (Kura) rivers, built a city and named it by his name. "

Spanish author of the XIX century, Juan Van Halen, who visited these places, speaking about Mtskheta, also noted that one of the nearest descendants of Noah, namely Meskhet, the founder of the city, elected him his capital, and not so much because of the charm of the place, how many of them for its convenient location. The city is fifty leagues from Ararat - the mountain to which the Noah ark after the flood came. In the IV century BC. e. Kartli king of Azo (Azovi) is declared the capital of the Kingdom of Kartli. Since the end of the 5th century AD. e. the capital of the Kingdom of Kartli has been transferred to Tbilisi. Before the completion of the construction of the Sameba Cathedral in Mtskheta, the Department of the Patriarch of Georgia was located.

Here are the remains of the fortified residences of the Armazi fortress (Armaztsihe), Bebrisciha, city quarters, burial grounds, as well as the complex of the Samtavro monastery (the main temple of the XI century) and the Svetitskhoveli cathedral. Near Mtskheta there is one of the most ancient in the country monastery temple Jvari (VI century), Shio-Mgvimsky monastery. The cultural monuments of the region are under the protection of UNESCO and belong to the world heritage. 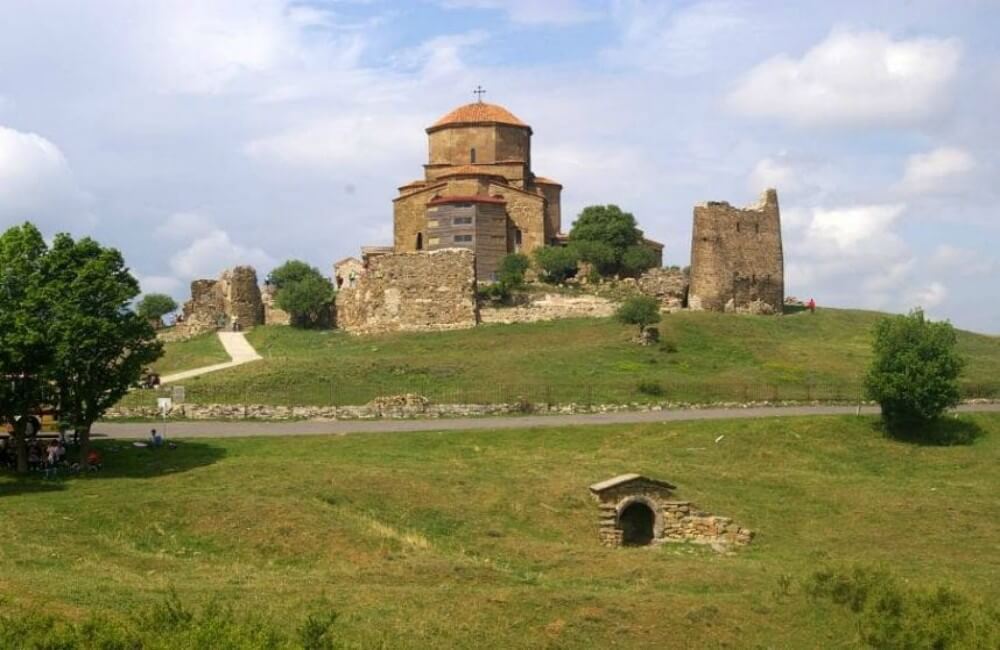 Jvari - Georgian monastery and the temple of the first half of the VII century. Located at the top of the mountain at the confluence of the Kura and Aragvi near Mtskheta - where, according to historical sources ("Appeal of Georgia", "The Life of Kartlian Kings"), the holy Equal-to-the-Apostles Nina crossed. Built at the top of a rocky massif, the church serves as its organic completion and the center of the entire surrounding landscape.

Unity with the landscape is emphasized by the fact that the monastery itself corresponds to the size of the rock exactly as 1 to 7. The shape of the temple is the result of long searches by Georgian architects who abandoned the shape of the basilica and sought the optimal shape of the central cross temple with a single interior space.

A small temple in size is a cross inscribed in a square with semicircular apses at the ends. The interior space has proportionality, clarity and clarity. The temple is completed with a dome on an octagonal drum.

The appearance of the facades is determined by faceted apses with flat niches. The eastern and southern side of the temple is decorated with sculptural reliefs and ornaments, on the facades of the altar apse - three reliefs with images of the horsemen. Sculptures are rude and naive in execution, but on the whole the ornament well emphasizes the architectural forms of the temple.

The architectural solution stands out for its exceptional integrity, insight into the landscape. The dome on an octagonal drum served as a venerable example for the Athenian Zion (in the Gori municipality) and many other Caucasian temples, becoming a symbol of medieval Georgia.

About the creator of the architectural masterpiece is not known. In some modern publications, one can come across assumptions that his name was Mikel Theli.
In 2004, Jvari was included in the list of the International Monument Fund, as one of a hundred that faces death, but the restoration work of 2007 allowed him to be excluded from this list. 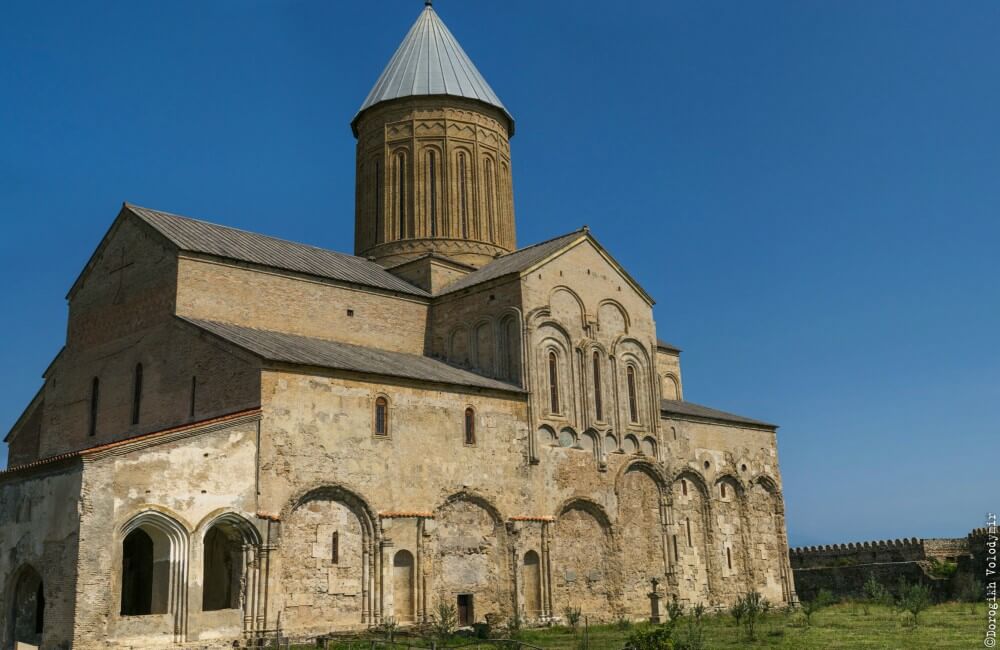 The Svetitskhoveli Cathedral is a Georgian Orthodox cathedral located in the historical city of Mtskheta, Georgia, 20 km north-west of Tbilisi. Svetitskhoveli has long been the main temple of Georgia and remains one of the most revered places to this day. It was here, inspired by Saint Nina's preaching, the first Christian king of Georgia, Mirian, was baptized. The place for the baptism of the king was not chosen by chance. The tradition of the Georgian Church has preserved the memory of the presence here of the greatest shrine of the Christian world - the Chiton of Our Lord Jesus Christ.

Svetitskhoveli absorbed the whole history of Georgia. Many of its kings and patriarchs are buried here, including the kings Vakhtang Gorgasali, Irakli II, who signed Georgievsky's treatise on Russia's patronage over Georgia, and the last Georgian king, Georgii XII. Here the intonation of the current Catholicos-Patriarch of All Georgia Ilia II took place.

Among the surviving historical buildings, Svetitskhoveli is the largest in Georgia. Throughout the centuries it has been the center of Christian Georgia. Even in the IV century, Christian king, Mirian III, on the advice of the Equal-to-the-Apostles Nina, built the first wooden church in Georgia, which has not reached the present day.

One of the foundations of the temple was the cedar, which denoted the burial place of the robe of Christ ("unshitted chiton"). In the second half of the 5th century, the pious king Vakhtang I Gorgasal built a basilica on the site of this church, the upper foundations of which were opened by Soviet researchers (head V. Tsintsadze) in the 1970s. and left for public viewing.

In the 11th century, the Catholicos of Georgia Melkizedek I (1012-1030, 1039-1045) erected a temple on the site of the damaged basilica. Today the existing cross-domed four-pillar three-nave church in the name of the Twelve Apostles was built from 1010 to 1029 under the supervision of the architect Arsakidze (mentioned in the inscription on the facade). 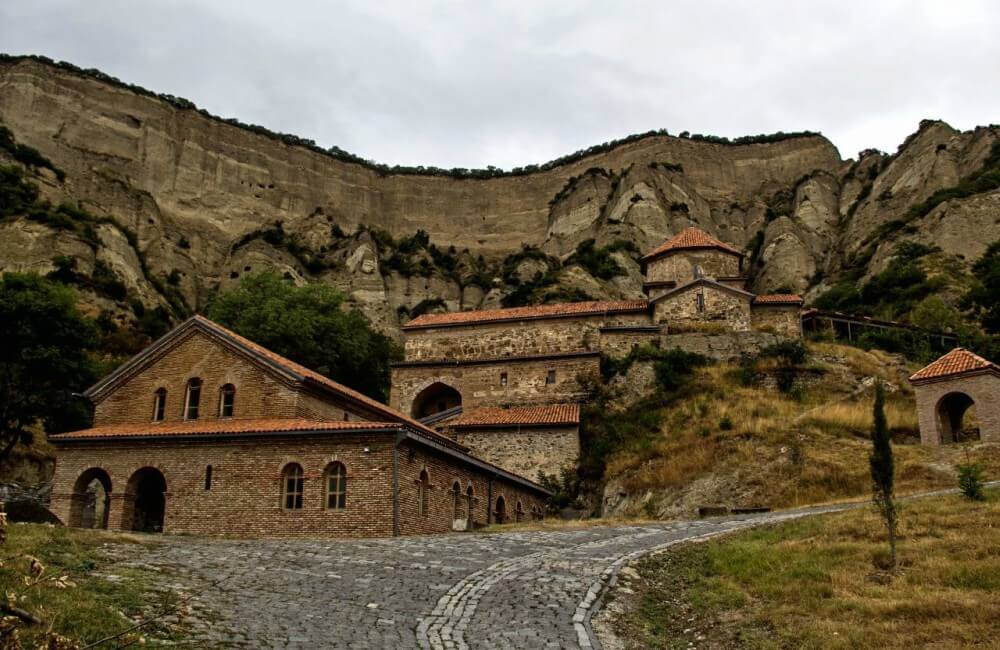 Shiomvime (cargo შიომღვიმე, Shio-Mgvimsky Monastery) is a medieval monastic architectural complex in Georgia, not far from the city of Mtskheta. It is located in a narrow limestone gorge on the north bank of the Mtkvari (Kura), about 30 km from Tbilisi's Georgian capital.
According to historical tradition, the first monastic community in this place was founded in the 6th century by the monk Shio, one of the thirteen Assyrian fathers who arrived in Georgia as Christian missionaries. Saint Shio spent his last years, a hermit in a deep cave near Mtskheta, later named Shiomgvime (Cave Shio).
The very first building is the church of St. John the Baptist (built in 560-580). This is a cruciform church in terms of plan, very simple and strict in its construction. In addition, the caves dug by monks and now visible around the monastery and along the road leading to the monastery complex are also included. The church dome rests on an octagonal drum and is covered with a conical roof. Inside the temple was placed a richly decorated stone iconostasis with scenes of the life of the Monk Shio, now in the Tbilisi State Art Museum of Georgia. The belfry of the church was erected in 1733
The upper church (Zemo Eklesia) named after the Mother of God is the central part of the monastery of Shiomgvime and built at the turn of the 12th century by the order of King David IV. Originally a domed church, it was later destroyed by a foreign invasion and rebuilt in 1678, as a basilica.

The refectory was built between the 12th and 17th centuries and is connected by a passage with the cave of Saint Shio. A small chapel of the 12th century, adorned with medieval frescoes, stands alone on a nearby hill.

The monastery was changed in the XI and XVIII centuries, but in many respects it retained its original architecture.

The archaeological expedition of 1937 showed that the water to the monastic community was supplied by a 2-kilometer water pipe stretched from the neighboring village of Shtalba and mentioned in the annals of 1202, as built by Bishop Anton of Chkondidi, the minister of Queen Tamara. 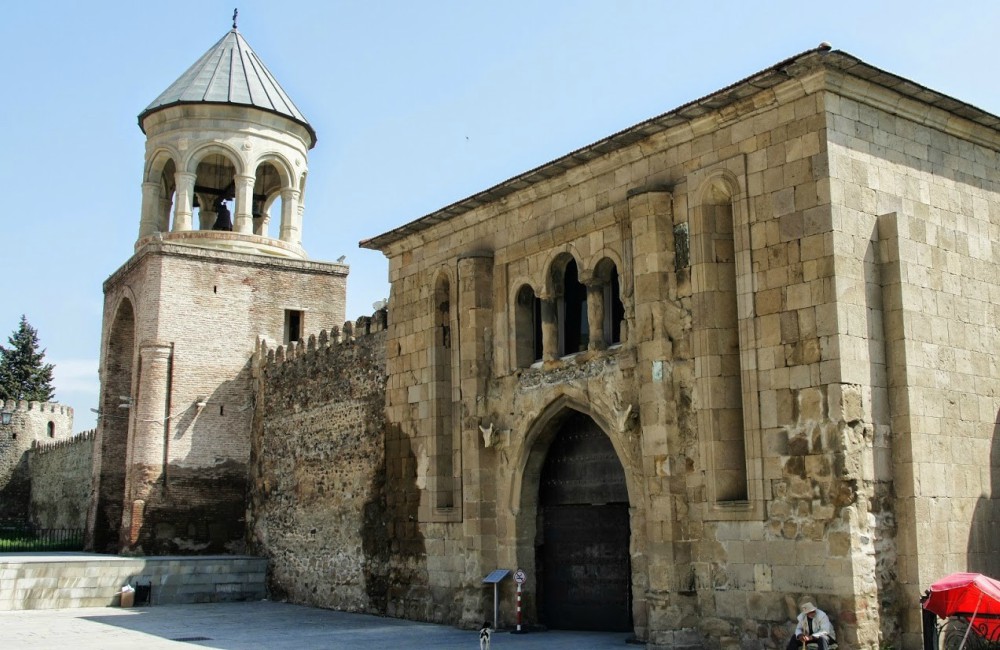 The Samtavro Monastery is a complex of the Samtavro-Preobrazhensky Church and the St. Nina's Women's Monastery located at the confluence of the Mtkvari and Aragvi Rivers (Mtskheta, Georgia). The monastery is run by the Catholicos Patriarch of All Georgia, the Archbishop of Mtskheta and Tbilisi.

The first church in this place is believed to have been built as far back as the fourth century by King Mirian III. Thanks to large donations, the temple was one of the richest in Georgia.

The temple was repeatedly destroyed and restored. In the first half of the XI century, during the reign of George I, under the decree of the Catholicos-Patriarch Melchizedek I, the church was expanded, the southern gate was added and decorated with original ornaments, which have no analogues in Georgian architecture. They also decorated the temple interior.

The cross-domed Samtavro-Preobrazhensky church, the small church of St. Nina, the bell tower of the XV-XVII centuries, the cylindrical tower-fortress of the XVIII century, the temple iconostasis of the XV century, the frescoes of the XVII century are preserved. In the southern gate is the church of Michael the Archangel. In the north wing of the church there are two churches. Eastern - St. John the Baptist, the western St. John Chrysostom. To the left of the large altar is the altar, to the right is the church of Saints Mirian and Nana.

In the temple of Samtavro there are many sacred objects: the part of the life-giving pillar, the miraculous icon of the Iberian Mother of God, the miraculous icon of St. Nina, donated by Tsar Georgii XII to his grandsons in 1870, the graves of the holy kings Mirian and Nana, the relics of St. Abybos of Nekres (under the altar) , the relics of the saints Shio of Mgvimsky and Gabriel of Samtavrius, part of the stone from the grave of Saint Nina from Bodbe and other relics. 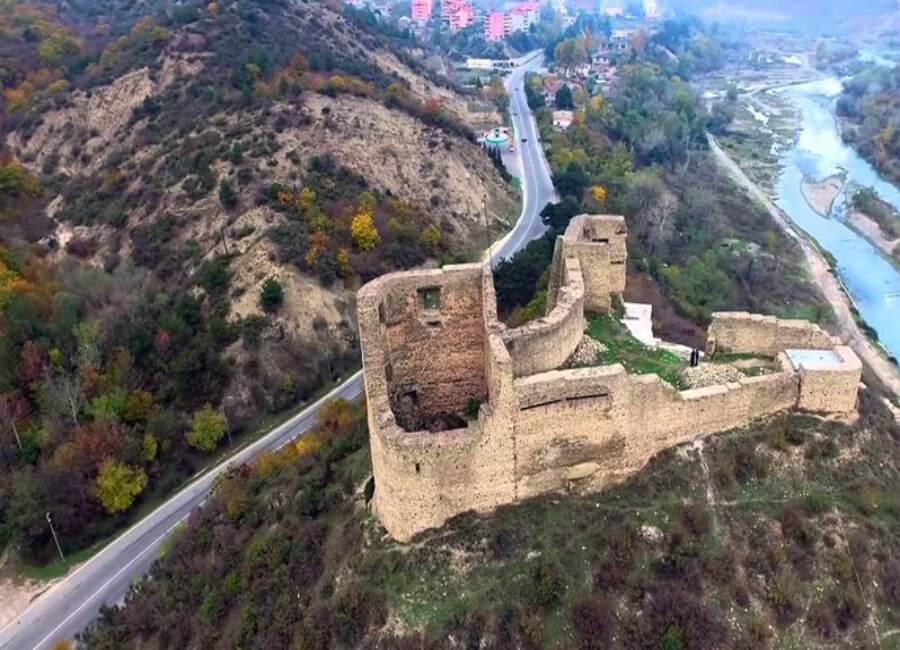 Bebrisciche (in georgian ბებრისციხე - fortress of the Elder) fortress in Georgia, now ruined, was badly damaged by a landslide. Archaeological monument. It is located on a steep cliff on the right bank of the Aragvi River, above the Georgian Military Road, about one and a half kilometers from the confluence of Aragvi to the Kura. The fortress served as a guard against the raids of the mountain tribes.

At present, part of the tower of the citadel, the western wall and some elements of other fortifications
It was erected on the northern outskirts of Mtskheta, possibly as far back as the I century BC. e. (this period is dated to the remnants of fortress walls discovered during excavations). Existing buildings date back to the 9th century.